In this section I am going to put the science related to ChemiProject, the board game, in chronological order.

We inform that we have started to program several videogames using ChemiProjectXD cards!

For this we have helped some friends of scientific disclosure. In this case Scratch. Scratch allows us to design video games with simple code and colors. In this way even children can play. (Using, the same strategy as our favorite game with the functional groups within the molecules) 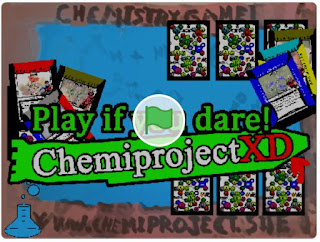 So we have helped several computer scientists to, -1 learn and -2 program some simple card games. The games we have made (click here to play) are based on traditional games.

We recommend using the computer, and not the mobile to play.

This year we present the free version of our game at the University of Valencia. It was an intense and fast morning, we could hardly rest. But those kids who played it had a good time!

Astea Zientizia perhaps the biggest enterprise of scientific disclosure of all Gipuzcua. And the science week is undoubtedly the most expensive public activity, and of course free, which you can attend.
The social impact is such that it is announced by the public media, such as television or newspapers.

Example. Even we announced in El Diario Vasco , both in Spanish and in Basque . 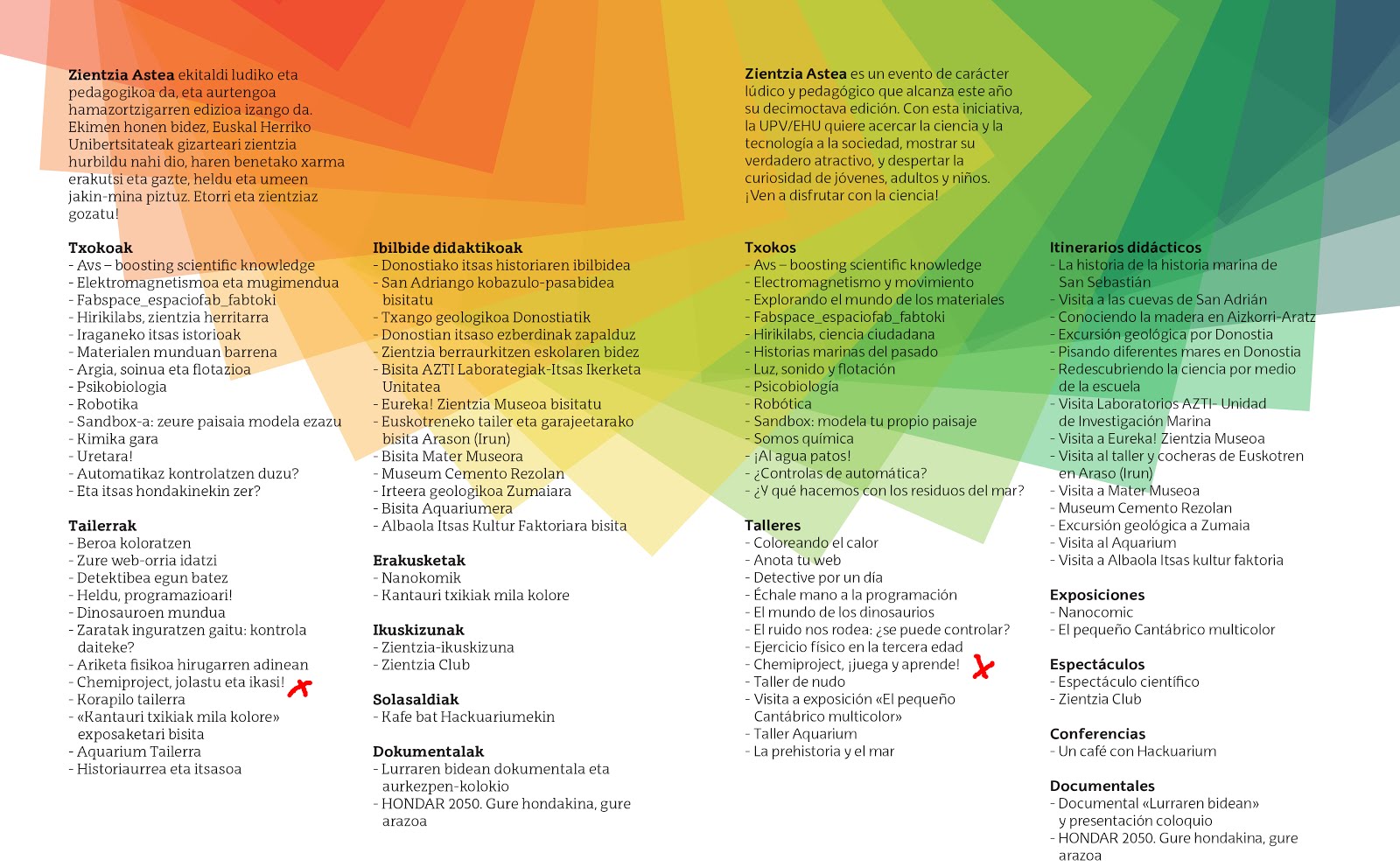 We conducted a workshop where children of various ages 5-15 participated. For 3 days we explained and handed version of ChemiProject pocket ). 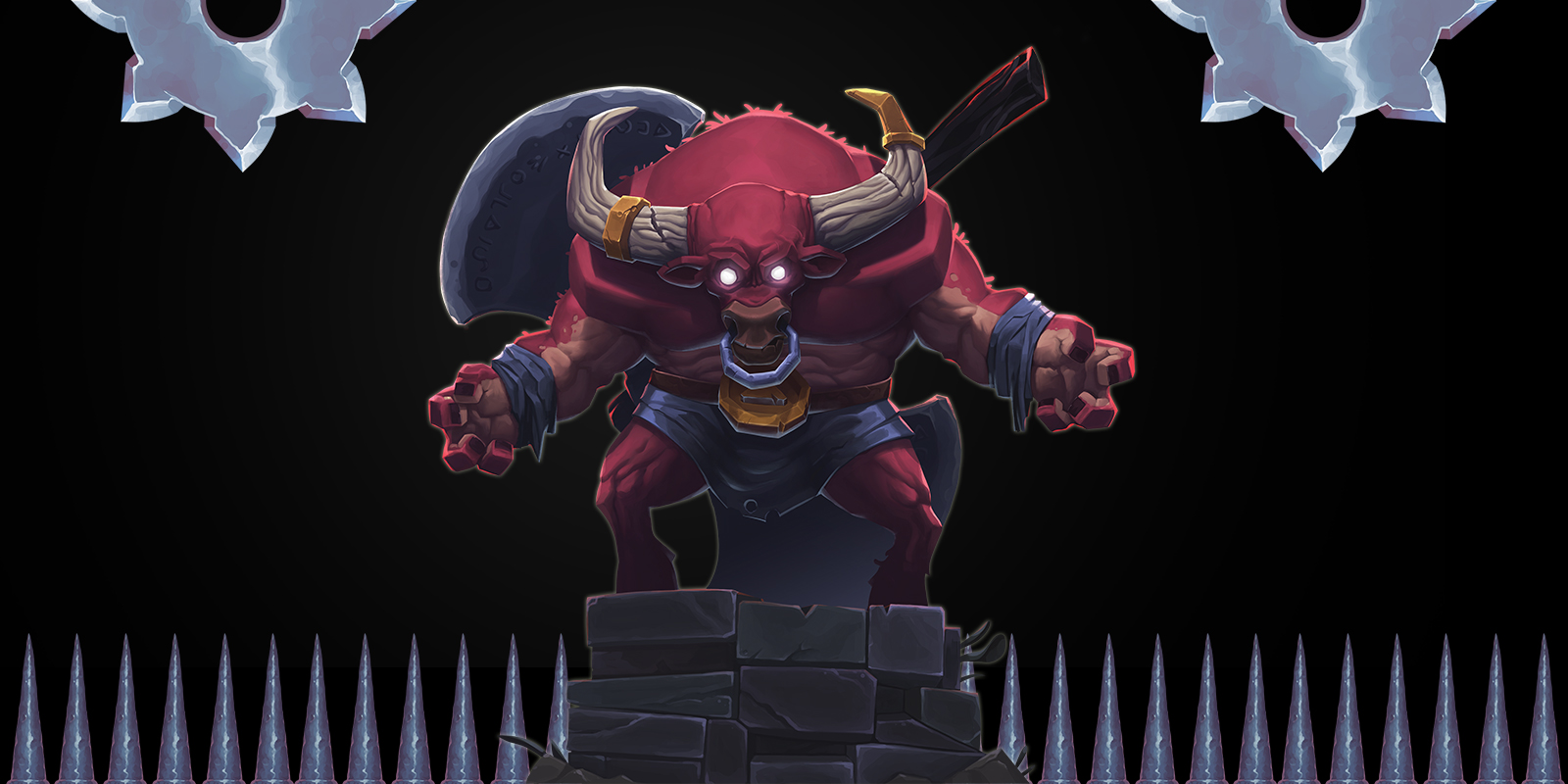 Under  support from the European Commission, on 20 and 21 October was held the GF18 in Athens, Greece. In this event several games and unreleased video game fun and educational were shown. It was a free event for all the public.
We had a table where we played with those brave men who dared to challenge us to a game of ChemiProject!
To all those who participated gifted them the paperback version.

We demonstrate once again that this is a real game for fun and not an exercise an exercise to acquire knowledge. 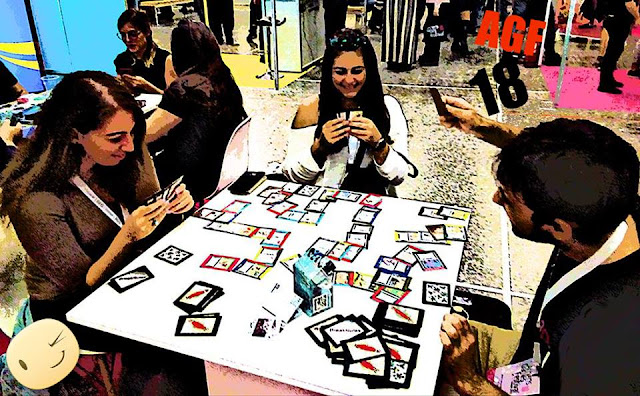 Finally, we were nominated as one of the best games !!!
Yes my dear, science games can compete at the same level as any other fun game.

Touluse, ESOFT (9-14 / 7/18)
The English version of ChemiProject, educational game to learn chemical reactivity, will be presented in one of the most important international scientific events science in the Euro Science Open Forum 2018 in Toulouse, France. in this prestigious event in 5,000 scientists, teachers and journalists will atended. We will continue teaching science in a fun way, using all the teaching strategies that our educational board game allows. And of course,ç, we'll take a look around in order to discover the latest scientific advances!!! 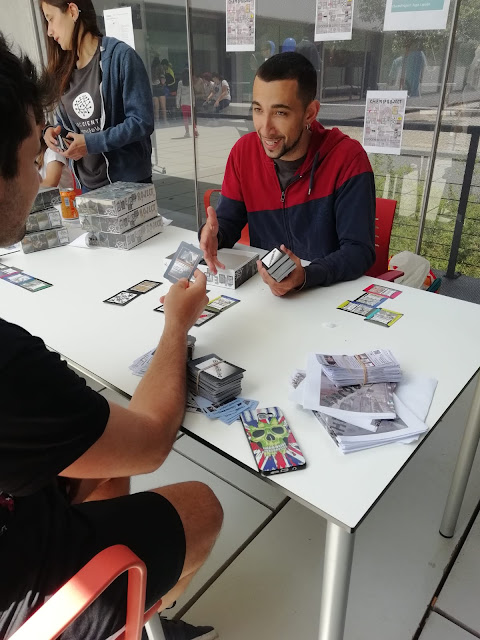 As you know las saturday valence Expociencia 2018 in which we present to the public our educational game ChemiProject. The activity was performance by Maria Dolores Canton Vitoria, physiotherapy and nutrition students by the University of Lleida and Alejandro Canton Vitoria, political science student from the University of Valencia. Both showed with dedication how to play to ChemiProject to a large number of people encompassed a wide range of ages and educational levels.  We watched as the children played without complications, school teachers demanding a presentation in class and companies request to buy some copies.

First we want to thank everyone for the exchange of views. Specially its director Rafael Ibañez who gave us the opportunity to present the game in a scientific outreach activity of the magnitude of Expociencia 2018.


A teachers (who are in Valencia or nearby) who are interested in motivating students within this chemical project, ChemiProject, we urge you to contact us via the Gmail distributed in pamphlets Expociencia ( canton@eie.gr) or through a private message to ChemiProject . Similarly, those interested in buying a copy of the expanded version, 1.1 ChemiProject, directed and we will inform you  what we can do exactly right now.


The next step, It will be to present to international level in the Eusoscience Open Forum (ESOF) in Toulouse, France, where Ruben Canton, the game's creator, will present the English version during the July 8-14 days.

ChemiProject the organic chemistry educational game created by a Valencian has international recognition! 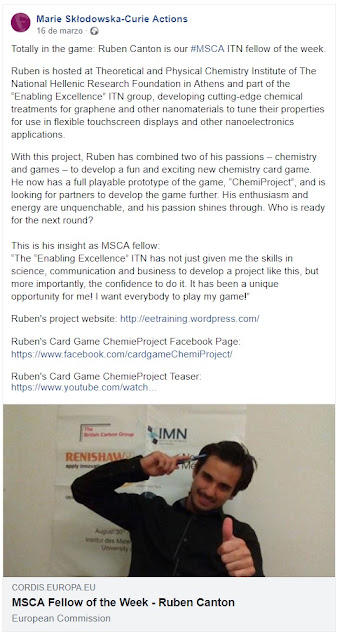 
Every week, the European Commission granted a short interview ' Fellow of the week' to members who develop an innovative project. Nominee this week is Ruben Canton-Vitoria, for the development of our boardgame ChemiProject. Interviewers were surprised by the highly educational nature of the game. Here, the fun makes learn eayier, and thanks to tis teaching strategy allows you to integrate some basic concepts of organic chemistry in a passive way.


With this boost of prestige and seriousness, we hope to capture the interest of publishers and start with distribution.


It has already become clear that ChemiProject has a future, now We only wish, be constant and work a little more. Try to promote science in a fun  and educational way, now we hope to have help a little of HELP.
The same European Commission announced a promotional video about the game, here I put to you may see:

In fact, we already have an impression of the final copy. As well
We could test the gameplay changes made after the first impression and we can say that the game is completely finished.

In order to discuss the Grand Challenge, the first prototype of ChemiProject, a game to learn organic chemistry was presented. This first version is functional, the format should be change, but it has all the cards and work for a tested!. Participants had a good time, (after chage some easy rules). And finally, the reviews were favorable, changed some small points and improved gameplay. 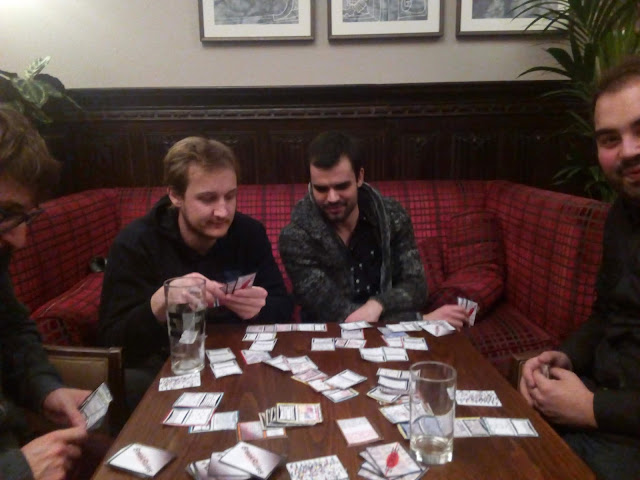 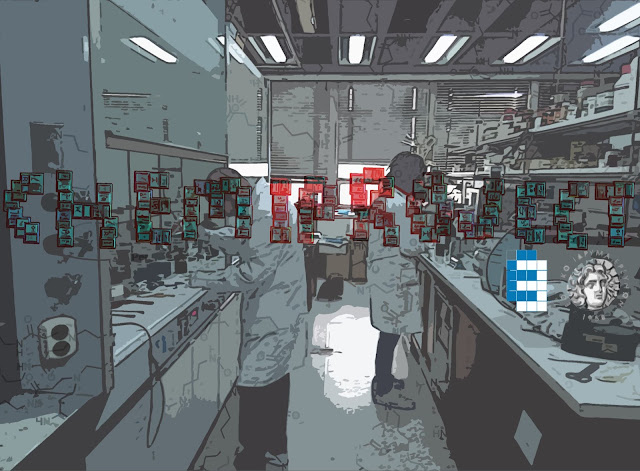 What I'm going to show you in this Blog!!

The aim of this blog is to present one of the most interesting educational games on chemistry of 2018.
It is a game for fun and shows advanced concepts, such as chemical reactivity or functional group in a very simple way. It uses various dymamic strategyies to make the game fun and teach easier. If you are a person who has an affinity for science and like games too, Take a look. You might like it.